The Holy Temple Menorah Background  Originally, in the Holy Temple, the Menorah was a seven-branched candelabra beaten out of a solid piece of gold. As one of the sacred vessels, the High Priest lit the Menorah every day in the southern part of the Holy Temple. Only pure, fresh olive oil of the highest quality was suitable […]

Chanukah Story and Traditions Background  During the Second Temple period, the Syrian Greeks infiltrated Israel and seized power. They tried to impose their cruel Hellenistic culture on the Jewish people, defiling every holy thing and forbidding Torah learning. Their goal was to eliminate the Jews’ connection to G-d and to indoctrinate the Jews with immoral […]

Deep Chanukah Insights According to the Talmud, the Sages instituted the celebration of Chanukah to commemorate an amazing miracle in the Holy Temple. After a bloody war in which the Greeks desecrated the Holy Temple and its sacred implements, there appeared to be no pure oil left to light the Menorah. While a vessel was […]

Rockets into Roses- From Rockets to Roses to Shelter 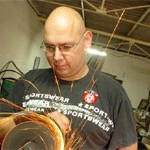 From Rockets to Roses to Shelters From rockets… Over 13,000 Kassam Rockets have been fired into southern Israel in the last 12 years, deliberately targeting Israeli civilians, causing chaos, destruction and death. An entire generation of children has been traumatized by the terror of ongoing rocket attacks. Israeli cities such as Sderot and Ashkelon continue […] Turning Terror into LIGHT! Terrorists in Gaza have fired nearly 15,000 rockets into southern Israel. As Hamas rockets explode in Israeli towns, blackening the sky and darkening the spirit, an Israeli artist is working hard to brighten up the day with sparks of light. He is turning the darkness of terror into a source of light […]

Why do Jews pray facing Jerusalem?

Why Do Jews Face Jerusalem When They Pray? No matter where in the world a Jew finds himself, his heart and prayers are directed toward Jerusalem. The reason for this spans over two thousand years of Jewish history, throughout which the Children of Israel have longed to return to their ancestral Promised Land. The Psalms […]

When the Holy Temple Stood